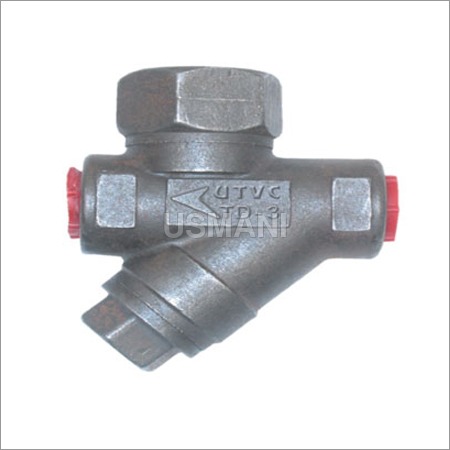 Steam Trap  is the most reliable trap offered by us. It is widely known for the compact design, hardened disc, and seat. Having made of the first rate metallic alloy, it provides excellent resistance to the corrosive media, and therefore, it does not degrade in the long run. Owing to its clever design, one can easily install the trap on the piping system. And also, to meet the variegated demands for it, we are offering Steam Trap  in a diverse range of specifications.

Usmani Thermodynamic Steam trap TD-3 is classified as Usmani valve operated traps and itâs the most widely used trap in the oil and gas industry amongst all types. This thermodynamic steam trap has an extremely robust design and works on a simple mode of operation. It can operate at very high temperature and pressure. The means of operation for the trap is the dynamic effect of steam as it passes through the trap as shown in the sketch 1 below. The disc above the flat face inside the control chamber or cap is the only moving part in the steam trap.

This is the commonest type of steam Trap relying on the fact that hot Condensate released under pressure will generate flash steam. Thermodynamic steam trap is fairly simple in construction, with only disc as the moving part inside the control chamber fitted on the top of the Trap body. The central inlet port in the body provides a flat seating surface with an annular groove around it to connect it to the discharge port.

The functioning of the thermodynamic trap can be understood from the accompanying sketch above. During the initial startup cold air and Condensate lift the disc from the seat to pass radially outwards through the annular groove to the exit port (refer Figure-1, Sketch 1).

As the Condensate approaches the accompanying steam temperature it tends to flash giving rise to the velocity of fluid passing under the disc and thereby causing a drop in the pressure. The flashed steam eventually filled in the control chamber, at the same time exerts pressure from above to push the disc down against the seat which snaps the flow passage shut to block the discharge of the condensate

With lapse of time the flash steam in the control chamber condenses (by loosing heat to the surrounding atmosphere) to once again lift the disc under the upstream line pressure and allow the flow of Condensate.

·         Less prone maintenance. As disc is the only moving part maintenance can be carried out without removing the trap from the line.

·         Can be used for high and super heated steam and are not affected with water hammer and vibrations. As such no condensate banking.

·         Same model can be used for wide range of operating pressures.

·         Freezing has no damage effect and are unlikely to freeze if installed with the disc in a vertical plane and discharging freely to atmosphere. However, operation in this position may result in wear of the disc edge.

·      If the inlet pressure builds up slowly, thermodynamic steam trap can discharge a large amount of air on âstart-upâ. However, rapid pressure build-up will         cause high velocity air to shut the trap in the same way as steam, and it will âair-bindâ. To avoid this case a separate thermostatic air vent can be fitted  in       parallel with the trap. Nowadays modern thermodynamic steam traps have an inbuilt anti-air-binding disc which prevents air pressure building up on top       of the disc and allows air to escape.

·     The use of a thermodynamic steam trap in some locations may be prohibited because of the noise factor during the discharge of the trap. If this is a             problem, it can easily be fitted with a diffuser which considerably reduces the discharge noise.

·     While sizing the thermodynamic steam trap care should be taken not to oversize the trap as this can increase cycle times and induce wear. Steam                 mains  drainage applications often only need to be fitted with low capacity versions, providing proper consideration is given to sitting the drain pockets           correctly.

The Thermodynamic Trap works on the principle of difference in the velocities of Steam and Condensate. Used Mainly on Drip lines of the main steam distribution line, uses condensate pressure to open the trap and discharge the condensate and then the Flash steam formed due to the high flash steam velocity & accumulation of flash steam over disc, Device close and trap the live steam when it appears.

Thermodynamic Steam Trap are compact and lightweight and discharge condensate as and when it is formed.

These steam traps work on the basis of a simple thermodynamic principle. Incoming condensate lifts the valve disk of the regulator to the open position, while steam causes it to close immediately. The traps in the DK series are correspondingly simple in structure, feature a small, compact body and are low in cost.

Especially recommended for use in: 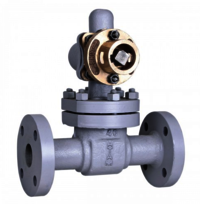